Protect the Rights of LGBTQ Students

Bullying of LGBTQ students leads to discrimination and the denial of equal access to public education.

A student must feel safe in a school in order to fulfill his or her full academic potential.

Adolescence is writhed with change. A complex array of physical, mental, emotional, and social changes enwraps the adolescent brain within a tangled web of uncertainty. Consequently, the adolescent brain, which is consequently still “under construction”, is charged with the responsibility to process change in all forms as either eustress (good stress) or distress (bad stress). Herein lies the problem. An adolescent brain that is in the midst of development and change can be easily overwhelmed by the complex processes of stress reactivity, coping, and recovery in response to change. Thus, causing adolescence to be a life stage that is synonymous with stress. 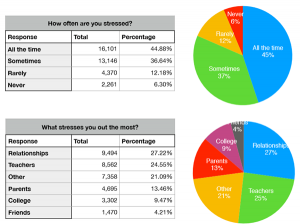 In fact, a 2014 study conducted by the American Psychological Society revealed that teens report “stress at levels far higher than what they believe is healthy and their reported stress levels are even higher during the school year. Meanwhile, teens report that stress is having an impact on their performance at home, work and school.”  Researchers asked teens to report on their experiences with stress within the most recent month. The results are alarming:

Now, imagine the additional strains that stress reactivity, coping, and recovery processes place on the brain of an LGBT adolescent in which one’s school climate is unwelcoming, hostile, and unsafe. Many of the common stressors of adolescence are significant enough to cause distress. For LGBT adolescents, common stressors are compounded by additional minority-related stressors. These include both stressors in the environment, such as prejudicial events, discrimination, and violence, and internal stressors, including expectations of rejection, concealment, and internalized homophobia. Data from GLSEN’s 2015 National School Climate Survey, The Experiences of Lesbian, Gay, Bisexual, Transgender, and Queer Youth in Our Nation’s Schools indicates that for many LGBT adolescents, school is a hostile environment.

Harassment and Assault at School

Many states have legislation protecting the rights of LGBTQ students. The New Jersey Law Against Discrimination protects all public-school students who belong to or are perceived to belong to a protected group. In New Jersey, schools are prohibited from discriminating against students based on…sexual orientation, gender identity or expression…; and requires covered schools to take appropriate action to prevent and remediate discrimination against a student because of his or her actual or perceived…sexual orientation, gender identity or expression…

New Jersey also protects LGBTQ students through enforcement of the New Jersey Antibullying Bill of Rights Act. As per the New Jersey Antibullying Bill of Rights Act, “Harassment, intimidation or bullying means any gesture, any written, verbal or physical act, or any electronic communication, whether it be a single incident or a series of incidents, that is reasonably perceived as being motivated either by any actual or perceived characteristic, such as race, color, religion, ancestry, national origin, gender, sexual orientation, gender identity, and expression, or a mental, physical or sensory disability, or by any other distinguishing characteristic, that takes place on school property, at any school-sponsored function, on a school bus, or off school grounds as provided for in section 16 of P.L.2010, c.122 (C.18A:37-15.3), that substantially disrupts or interferes with the orderly operation of the school or the rights of other students and that:
a. a reasonable person should know, under the circumstances, will have the effect of physically or emotionally harming a student or damaging the student’s property, or placing a student in reasonable fear of physical or emotional harm to his person or damage to his property;
b. has the effect of insulting or demeaning any student or group of students; or
c. creates a hostile educational environment for the student by interfering with a student’s education or by severely or pervasively causing physical or emotional harm to the student.”

LGBTQ students need champions within the school community to serve as advocates and change agents. The wheels of culture change turn slowly. With persistence, perseverance, and endurance, public schools across the nation can be free from the harassment, intimidation, and bullying of LGBTQ students. School leaders must embrace their LGBTQ students and afford them with the same protections as all protected groups. They must champion efforts to ensure that schools are safe, civil, and conducive learning environments for all students regardless of gender identity, gender expression, or sexual orientation.

After all, “The culture of any organization is shaped by the worst behavior the leader is willing to tolerate.” (Steve Gruenert and Todd Whitaker, School Culture Rewired.)

← Bullying of Students with Special Needs, Discrimination and Denial of FAPE
Desperately Seeking Civility in Our Schools →