Being Proactive Instead of Reactive

A teacher’s perspective by Holly Meisel

During my three years as an elementary school teacher in South Texas, I would witness bullying behavior in various places around the school such as in the lunch line, at recess, a bus stop, and in the hallways. What constitutes as bullying behavior? Good question.  I recently overheard a teacher say, “I’m so over that word (bullying). Schools feel pressured to respond to every child disagreement so that they don’t get labeled as tolerant of bullies. The parents also over-react because they don’t want their child being labeled the “bully child”. There are countless trivial issues that are being brought to the school’s attention. Parents request teacher/principal conferences regarding friendship issues that aren’t even taking place at school or school sponsored events! Over-reacting is getting ridiculous.”  When I heard this I thought to myself, why? Why has the term bullying become such a hot button word when back in the old days if another kid was calling you names, you’d just suck it up and apply it to your overall social development? A law for anti-bullying? Years ago the thought of that would have been absurd. What has changed in recent history to cause the term “bullying” to resurface and draw the attention of so many? No, it’s not the movie. It’s websites such as bullycide.org.

Child/teen suicide is strongly linked to bullying and it’s a worldwide epidemic. Why is that? Are kids just being overly sensitive? Are kids just meaner than they use to be? Are parents contributing to the problem by “over-reacting” as one teacher put it, causing unnecessary drama? Take a moment and look at the resources kids have today versus what we had in our day. Kids have access to internet, emailing, texting, and other forms of communication that enable them to learn faster, become smarter, and be more prepared for what lay ahead for the future. Sadly, these resources come at an early age when emotional maturity has not developed, causing many to use these resources in a negative way, compounding what use to be a simple name calling back and forth at recess to a full blown internet/texting harassment that reaches every peer in a matter of seconds. As adults, we may not be able to relate to this, but we have to acknowledge that it’s very real and it’s changing the way our children communicate with each other.

When a teacher makes the decision to ignore bully-type behavior such as name-calling and nasty stares as not being serious, they are making a huge mistake. They are enabling the bully to get away with more the next time they feel inclined to harass. If a teacher doesn’t intervene at some point early on and redirect the behavior, they are causing the situation to get worse.

“If a teacher doesn’t intervene at some point early on and redirect the behavior, they are causing the situation to get worse.”

The goal of every teacher is to have a safe environment for their students. If a child doesn’t feel safe at school, they cannot learn. Safety must always come first. My first year teaching was at the 4th grade level. I remember learning from another teacher that one of the best ways to have peace in the classroom was to form a regular “friendship circle” during class. This activity only took about 20 minutes, but it was so powerful and helped everyone, including the bullies and the victims. Students would move their desks and grab a chair to form a circle in the center of the room. It was an intense activity that I made them take seriously, which they did. The instructions were that they needed to say something nice about someone else in the circle. The next time we met for the friendship circle, they were to choose someone different to say something nice about. Down the line, a child who bullies others would end up verbally complimenting their victims, and vice versa. This had an enormous effect on the classroom environment. It would literally make me cry when I saw the smile and joy that came from a student who received a compliment from someone who was mean to them in the past. This activity helped to eliminate the bullying in my class and actually empowered them to look for ways to help each other out so that when we revisited the friendship circle – which occurred about twice a week – they had something positive and kind to say to someone. There is more happiness in giving than there is in receiving, and I instilled this behavior in my students whenever possible. One of my favorite quotes I had up on the classroom wall read “No act of kindness, no matter how small, is ever wasted.”

“It would literally make me cry when I saw the smile and joy that came from a student who received a compliment from someone who was mean to them in the past.”

Reaching out to students about accepting others came from many different angles, but one of the most effective ways I discovered and must share came through children’s literature. Kids, no matter what age they are, love to be read to. I made it a habit to read a story to them at the start of class. A few chosen one’s include: The New Girl…And Me (story by Jacqui Robbins; art by Matt Phelan pub. July 2006, Atheneum/Richard Jackson book). I love this children’s book because it hits home as to how difficult it is for young children to make new friendships. 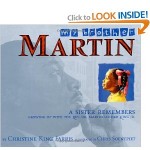 My Brother Martin: A Sister Remembers Growing Up with the Rev. Dr. Martin Luther King Jr. (story by Christine King Farris; art by Chris Soentpiet pub. January 2003, Simon and Schuster Books for Young Readers). This book is a great reminder that little children don’t see race, gender, disability, or economic status – they see a friend. It’s their parents, guardian, or someone in their environment who teaches them to think differently. As teachers, our job is to teach that we are all part of the human race and should respect everyone for who they are and to branch out and make friends with everyone.

Another book I’ll share that had a personal effect on me is “Thank You, Mr. Falker” (autobiography by Patricia Polacco; book designed by Donna Mark pub. 1998, Philomel Books). I love this book because it shares the enthusiasm of a young girl who can’t wait to go to school to learn to read, only to find that it’s harder than she could ever imagine. The kids in her class all made fun of her and she became isolated. This book is a personal tribute to a teacher who changed her life. 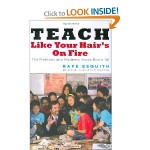 A book I recommend for all parents and teachers to read is Teach Like Your Hair’s on Fire by Rafe Esquith. This author inspired me to teach Shakespeare to my 6th grade students who for most of them, Spanish was their first language. By the end of the school year my students performed Romeo and Juliet to parents and the community on the stage in the cafeteria. It was an experience I know they will never forget. This book is motivational for parents, teachers, and anyone who cares about the future of our children.

From my perspective, teachers need to become more involved in their students’ lives rather than turning the other cheek. It is our responsibility to be proactive examples of how to treat other people. It breaks my heart to read news articles about teachers who allegedly contribute to the bullying of their students. Teachers have a very powerful and influential role in schools to help prevent bullying, which typically starts at the elementary level and in some cases, before that. In this age of technology, learning how to identify Harassment, Intimidation, and Bullying behavior at an early age and redirecting that behavior is something every teacher should take seriously.

← Amy Weber: Into the Abyss: One Filmmaker’s Journey Into the Bully Crisis
3 Types of Bullies →